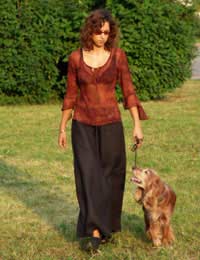 The woman places her hand over the dog’s head closes her eyes and begins to hum. The noise distracts the dog, which was previously panting away seemingly unconcerned, and which now fixes its gaze on the woman. The dog tilt’s its head, almost as if it is listening to something the other people in the room can not hear or understand. After a moment the dog looks away and resumes panting. The woman stops the humming, opens her eyes, and gives the dog a vigorous rub before releasing it. The dog trots back to its owner, who looks at the woman expectantly. What will the pet psychic tell her about the inner workings of the dog’s mind?

What are Pet Psychics

Pet Psychics are people who claim to have the ability to communicate in a much more meaningful and accurate way with pets - and animals in general - than what is considered normal. With their ability a pet psychic may tap into the hidden mystery of why Fido won’t stop peeing on the sofa, or why Miss Kitty refuses to drink milk no matter how much her own begs. In extreme examples pet psychics are used to attempt to solve real life crimes, perhaps identifying the criminal through the connection established with an animal witness.

The people who take on the title of pet psychic belong to the general ESP or clairvoyant category, with a special emphasis on animal communication. Sometimes it is a direct communication mind to mind, where the pet psychic can literally hear the thoughts of the animal and understand their meaning, and convey thoughts and meaning back to the animal’s mind. Other times it is more of an emotive ability, with the pet psychic picking up on the emotional state of the animal much the way an empathic psychic would with a human subject.

Pet Psychics in the Media

Pet Psychics have often operated much in the same way as palm readers, opening up shops in extreme rural or city environments and catering to local clientele. In 2002, however, one pet psychic has hit the mainstream media by securing a TV show on the animal centric cable channel Animal Planet. The show, smartly titled “Pet Psychic”, featured Sonya Fitzpatrick, a woman who claimed she could communicate with animals of all sorts. Sonya would meet with a client and their pet, observe them together and then get in touch with the pet with her ability. Taking things a step further, she claimed she could also communicate with deceased pets, bringing back messages from beyond the grave.

The show Pet Psychics and its star Sonya Fitzpatrick received ample criticism, including having websites that were dedicated to breaking down the show and her reputed ability to communicate with all the animal kingdom. Sonya was accused of using a number of techniques that are not paranormal, including “cold reading”, an ability used by mentalists to observe a target’s behaviour and then make general open ended statements to secure the target’s trust and give the impression of secret knowledge gained through supernatural means.