Home > Mind Over Matter > All About Pyrokinesis 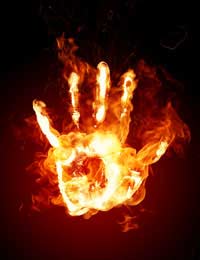 Fire is a universally fearsome element, one with a great deal of power attached to it; with fire, mankind can rise above the animals and create a world in his image. On the flip side, with fire, mankind can be hurt, crippled and destroyed. The ability to control fire in any form is a symbol of power and the ability to control fire simply by thinking about it is the power behind Pyrokinesis.

Pyrokinesis comes from the Greek words for fire (Pyro) and movement (kinesis), suggesting control. In some traditions a pyrokinetic (a person who can employ pyrokinesis) can create fire, but “technically” a pyrokinetic can only manipulate fire, although they can ignite flammable substances, creating fire after a fashion. The ability to create fire from thin air, with no flammable substances, would be called “pyrogenesis.”

Pyrokinesis falls under the umbrella of Telekinesis (or, sometimes, psychokinesis) in that a practitioner uses the mind to affect the physical world around them. Traditionally a pyrokinetic can ignite a fire when the conditions are appropriate—with an adequate supply of what a fire needs, fuel, oxygen and heat—and then manipulate the fire’s intensity and direction in which it feeds. Thus a pyrokinetic could inflame a stack of newspapers and then either contain the flames so that a nearby curtain does not catch fire, or cause the fire to spread rapidly through the area at unnatural speeds.

While there are no empirical experiments that have proven the existence of pyrokinesis as displayed by popular tradition, the ability to generate heat has been marked among certain martial arts practitioners. These martial artists, by manipulating their “chi” energies, can radiate heat from their hands or other parts of their bodies. Some argue that this ability is not “true” pyrokinesis but rather a form of bio-feedback and control, increasing and augmenting the body’s natural ability to generate heat, while others say that it is a mind manipulating the material world and thus qualifies as TK (telekinesis).

A condition which, according to anecdotal evidence, seems to affect the elderly more than any other group, SHC has a few trademark indicators that separate it from normal fire damage. In a house fire a victim’s trunk is typically whole with the limbs and head burned off, but a SHC case is the opposite, with the trunk gone but parts of the limbs - hands and feet - remaining. Also cases where a person dies or is injured by fire but nearby flammable objects, such as bedclothes or furniture, remain untouched, as if the target was consumed from within.

SHC is a phenomenon which is not directly linked to pyrokinesis, but logical conclusions can, and have been, drawn between the two. A person suddenly catching fire for no discernable reason could certainly be the target of a pyrokinetic, if one supposes the existence of such. Other theories around both SHC and pyrokinesis concern practitioners struggling to control their ability and accidentally turning it on themselves, resulting in SHC.

From Steven King’s story Firestarter to the Marvel Comics villain Pyro the idea of man controlling fire with the mind is a popular one. Like many other forms of paranormal activity, however, pyrokinesis has not been proven beyond any shadow of doubt to exist.
Next Page

Being Moved by Telekinesis

Physical Training to Enhance the Mind
Share Your Story, Join the Discussion or Seek Advice..
i wantlearn telekinesis and psychokinesis and pyrokinesis. And i don't know anyone methods on video or books about this subject. please help me to learn . thanks antonio.
diniz - 18-Jul-13 @ 4:09 PM
Well this article is a very good read indeed. Questions but i have not place to start but i guess i will start here i found that is article has very good knowlegde indeed. But to the point of it never being done. Why i say this is because i will be the first to say and show this gift in it trust form. You can check me out on youtube where i have many videos on this topic. The youtubr name is redvenom10 darkopyrokinesis pt.2 there is many parts to it as you see me evalve to the next stage of this gift. please come there and check me out and leave a comment as well and tell all you know and can about it because i want to help the world undstand this power more.. Once agian thanks and have a great day
Dark Moon - 30-Nov-12 @ 4:32 AM
Title:
(never shown)
Firstname:
(never shown)
Surname:
(never shown)
Email:
(never shown)
Nickname:
(shown)
Comment:
Validate: