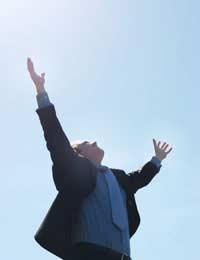 The man who lay on the table wore no shirt and while there was no visible incision on his stomach, there was blood. Standing over him was a man who claimed he could remove the tumour and had set about doing so. A shocked woman watched as the psychic surgeon seemingly reached into her husband’s torso and pulled out a twisted piece of flesh, tossing it to the ground. A sponge was produced and the blood was wiped away, once more showing no cuts on the patient’s flesh, evidence, some would say, of a successful Faith Healing.

What is Faith Healing?

Faith Healing is many things to many people. In the above example a man who displayed expert knowledge of sleight of hand and the charisma needed to con a sick patient produced blood and a chicken gizzard from nowhere in what is called psychic surgery. In other examples televangelists “lay hands” on their parishioners and proclaimed them healed of physical injury and disease. In still other cases terminal cancer sufferers pray with their pastor and then get a clean bill of health from their doctor. All of these cases show one form or another of Faith Healing, and while it is not easy to disprove all of them, some can be shown outright to be nothing more than fraud.

Magician’s Penn and Teller, well known for their passion in debunking frauds who prey on the public, have demonstrated in the past how psychic surgeons work, exactly duplicating their efforts in a way that made it appear they were removing organs from the target using mental powers.

There are many ways a person can become healthy that look like they are supernatural in nature. Spontaneous regression is fairly common and has no solid medical reason to support it. Thus, the healed patient often ascribes the healing to a miraculous source. In the case of a person praying to be cured and the cure follows the prayer, that person may believe it was the prayer that brought the healing—in many cases there is no cause to dispute this belief. In the case of a person claiming to have the power to heal and using fraudulent methods to deceive, however, there is a very real danger in accepting this claim. Should a person believe they are healed and stop a course of medication that is helping them, for example, they could grow worse and die.

Faith Healers often use many of the same tools as fraudulent mediums and fortune tellers, especially Hot and Cold Reading. By using such reading techniques the faith healer can display his or her ability to learn information either through divine or psychic means, thus establishing themselves as a figure of power. From here it is just a step or two away from convincing a target that the faith healer has the ability to cure the ill.

Faith Healing, by its very definition, requires faith. It is likely that there would be little hard evidence that the healing took place or if it did, that it was the faith healer’s power that caused it to happen. Most evidence on faith healing, like much other supernatural and paranormal activity, is anecdotal in nature.
Next Page