Home > The Paranormal > Connecting Ghosts and the Clairvoyant

Connecting Ghosts and the Clairvoyant 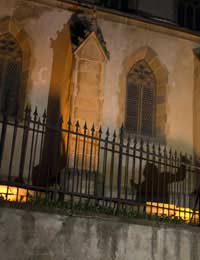 Many people claim to have psychic powers such as clairvoyance; the ability to see things with the mind rather than the eyes. For every person who claims to have the power, there seems to be a different reason they have it. Magic, aliens, angels, chi, yoga—the list goes on and on. One possible source, closely related to all things paranormal, is the ghost. The spirit of a dead person giving information to the clairvoyant, either coerced or willingly. Would such a person be a clairvoyant then or a medium?

A medium is a person who channels the spirits of the dead in one fashion or another. They may simply speak with the spirits, asking questions and unable to compel answers, depending on persuasion as with the living. They may control spirits, forcing them to answer and do their bidding. Or they may be the unwilling participant in the party, one whom the spirits use to act out their issues - it is a combination of these versions that is often the case when a person claims sprits are their source of clairvoyance.

A spirit, practically by definition, is formless; it has no body. As such it has a great deal of latitude in locomotion and the rules governing how a spirit travels are not exactly available in the local library. As such it can be surmised that a medium employing clairvoyance is using a sprit to travel to a distant place and then back, relaying what it has learned. Or perhaps the return trip isn’t strictly required, if the medium does not require the sprit to be present to commune with it.

Other theories surmise that the medium makes contact with a sprit already in place, or summons one with personal knowledge of the area in question. The idea that a clairvoyant conducts remote viewing by means of astral projection is different than from mediumship. Astral projection implies that the clairvoyant’s spirit leaves the body and moves by will alone, but always remains alive.

If a clairvoyant is not a medium and lays claim to a different source of their power, it would not be unusual for ghosts and the like to still manifest around the clairvoyant. Again dependant upon belief, the clairvoyant’s ability is outside the normal and the paranormal has always been the place for ghosts. A psi sensitive may find themselves acting like a magnet to other spiritual forces, sometimes crossing over to becoming an unwilling medium in the process.

A psi sensitive person, again by definition, is typically more aware of places and people that are embroiled in the paranormal. Graveyards or places where people have died traumatically have been known to be avoided by the psi sensitive, who often experience uncomfortable sensations there.

There is a thin line separating the operation of psychic ability and the awareness of and acceptance of ghosts. In some cases, as stated above, ghosts are the reason for the psychic ability in the first place. Whether as a source of their power or simply because their power makes them attune, clairvoyants are considered to be linked to the ghostly.