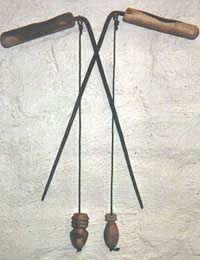 The farmer looked over at his wife and shook his head, more at himself for allowing this to transpire than for her suggestion. He turned back and watched the stranger walking slowly along the perimeter of his land and wondered how long he should allow this to go on. The man held his hands out slightly in front of himself, stiffly, although the forked stick in his hands was held loosely enough, from the way it slowly bounced up and down. The farmer was about to call out for him to give it up when the stranger suddenly stopped, just as the tip of the “Y” shaped branch dipped twice and then hung straight down. Could it be? Did the dowser actually find water?

What is a Divining Rod?

Also referred to as a “Dowsing Rod”, a Divining Rod is a tool used by those who claim to psychic powers of detection, often in search of a precious commodity ranging from gold to water. There are two different kinds of divining rods.

With the first, the rod itself is of varying size but typically shaped similar to the capital letter “Y”; a straight bit with two typically shorter handles coming from one end. The divining rod is made of willow or hazel wood and is grasped with the palms down. Finding water with a willow dowsing rod is often referred to as “Willow witching.”

The second kind is actually a pair of rods, each shaped like the capital letter “L” with one held in each hand. The shorter ends are grasped and the longer ends protrude in a straight line; when the desired object is found the longer ends cross over each other to form an “X”. These divining rods are usually fashioned of blown glass or metal; if metal, brass is usually preferred, as some believe that the Earth’s magnetic field can interfere with dowsing.

What are dowsers typically looking for? Often whatever they are being paid to look for, but traditionally underground water, oil or other minerals is on the list. The reason dowsers are able to find the target varies between a psychic sensitivity tuned thought the rods to a physics based answer that traditional science does not support.

For the Y shaped, wood rod, it is believed that “effluvia” is in the air above ground from the water, for example, which gets soaked into the wood and makes it dip. If this were the case then anyone holding the dowsing rod should be able to get it to work.

The other explanation is that the person holding the rod is actually detecting the presence of the target material and the rods are just a method of channeling that perception. Some dowsing practitioners claim to be able to find more than water underground, taking their talent to the body and detecting toxins in the blood and the like.

Dowsing is a popular element in fiction, but also remains active in some rural communities. There are few empirical tests on record as to the effectiveness of divining rods, with most evidence – like a lot of paranormal topics—being anecdotal in nature.